At the request of the Ministry of Economic Affairs and Climate, we explored the system effects of adding 3rd generation nuclear energy into the Dutch energy system in 2050 as set out in the II3050 project 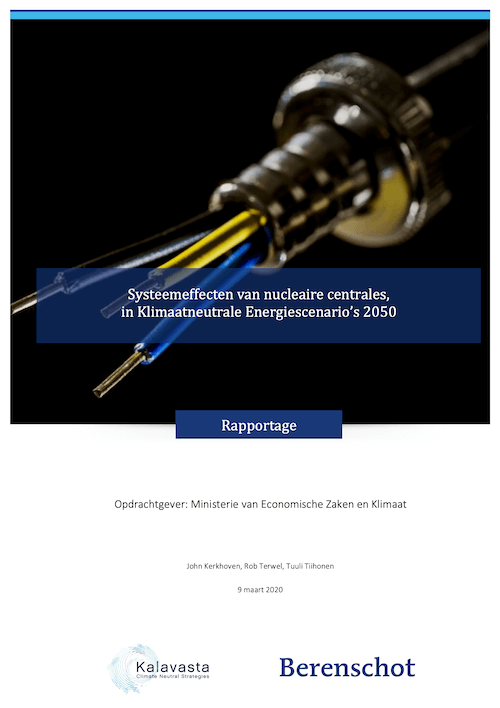 Why was nuclear energy added to the II3050 report as a separate variant?

Nuclear technologies were not part of the 2017 Net van de Toekomst report, nor were they in the scope of its successor, the” Integrale Infrastructuurverkenning 2030-2050” (II3050). At the request of the Ministry of Economic Affairs and Climate, Kalavasta and Berenschot extended the scope of the II3050 study to include nuclear energy in a separate report. This was done by creating a variant of one of the scenarios of the original study. This variant considers the system effects of adding 9 GW of nuclear to the energy system described in the European scenario. This scenario is based on a free and integrated European market. It is characterized by a CO2 tax being the main instrument driving the society towards carbon neutrality. The nuclear variant of the scenario is not a replacement of the European scenario in II3050. It is a stand-alone variant of it. This study is a techno-economic exploration of adding nuclear to the Dutch energy mix in one scenario, i.e. it does not consider the political, societal, or ethical implications of nuclear technologies.

There are many types of nuclear technologies. Which ones did you study and why?

We were requested to limit our study to state-of-the-art technologies. We agreed with the Ministry of Economic Affairs and Climate that the specific technology considered is the EPR, a third-generation reactor with extensive safety features and efficiencies superior to those of second-generation reactors. The three EPR projects being undertaken within the European Union at the moment would enable the hypothetical Dutch nuclear project to profit from learning effects gathered in a European context. We assume the nuclear project to be a greenfield one.

How did you go about studying the effects of adding nuclear energy to the Dutch system?

This study is above all a system study. It is not a comprehensive study regarding the costs of nuclear technologies. Information on costs were nevertheless required for the assessment of the system effects. Given the rapid developments in costs of many technologies, we used recent reports from organizations such as SFEN, OECD-NEA, and IRENA as sources for the costs of these technologies in 2050. For the assessment of system effects and costs, we “parameterized” cost of the different sources of electricity. For this purpose, we used the approach of levelized cost of electricity (LCOE). LCOE is a manner of representing the total lifetime costs of electricity production related to the total lifetime electricity produced in a manner that allows for comparison between different sources of electricity.
We created a separate Excel model to calculate the LCOEs of the different sources of electricity. The excel model and its in-depth documentation are publicly available in order to allow others to explore effects of adopting different assumptions. The results from the LCOE calculations were transferred into the aforementioned European scenario, which has been developed with the Energy Transition Model (ETM) by Quintel Intelligence. The ETM was then used to explore the system effects and costs of adding nuclear to the energy system and arrive at the outcomes of this study. Finally our results were reviewed by PBL and OECD NEA.

How does nuclear perform in this carbon neutral energy scenario?

We explored three different cost perspectives in this study: the LCOE, marginal costs, and system costs. The LCOE perspective defines the breakeven price of electricity. We explored different assumptions regarding the capital cost, the cost of capital, the full load hours, and the lifetime of the plant to account for sensitivities. The results of the LCOE calculations are instrumental as inputs of the ETM calculations. The marginal cost perspective on the other hand defines the merit order and thus the operational hours of each plant. As renewables have no variable operational costs, their marginal costs are zero. Therefore, they place first in the merit order, ahead of nuclear and the dispatchable plants.
For the system costs, four different modes of operation of nuclear plants were explored: a pure market-driven scenario where nuclear is dispatched according to its position in the merit order, a nuclear plant that covers demand peaks of electricity and otherwise produces hydrogen through electrolysis, a plant that is must-run, and finally a nuclear plant solely producing hydrogen through electrolysis. In this perspective, we could model second order effects, including the option of nuclear energy replacing dispatchable plants or the more cost-intensive renewables. The first sub-variant produces a demand curve that is not technically feasible for a nuclear plant. For the rest of the sub-variants, technical feasibility was not an obstacle. In all scenarios, the total costs of an energy system with nuclear were different than the reference scenario, under the assumption that the risks of building and operating nuclear plants would be shared between government and private companies.