At the request of the Dutch grid operators, we explored together with Berenschot through four scenarios what a climate neutral Dutch energy system in 2050 might look like. 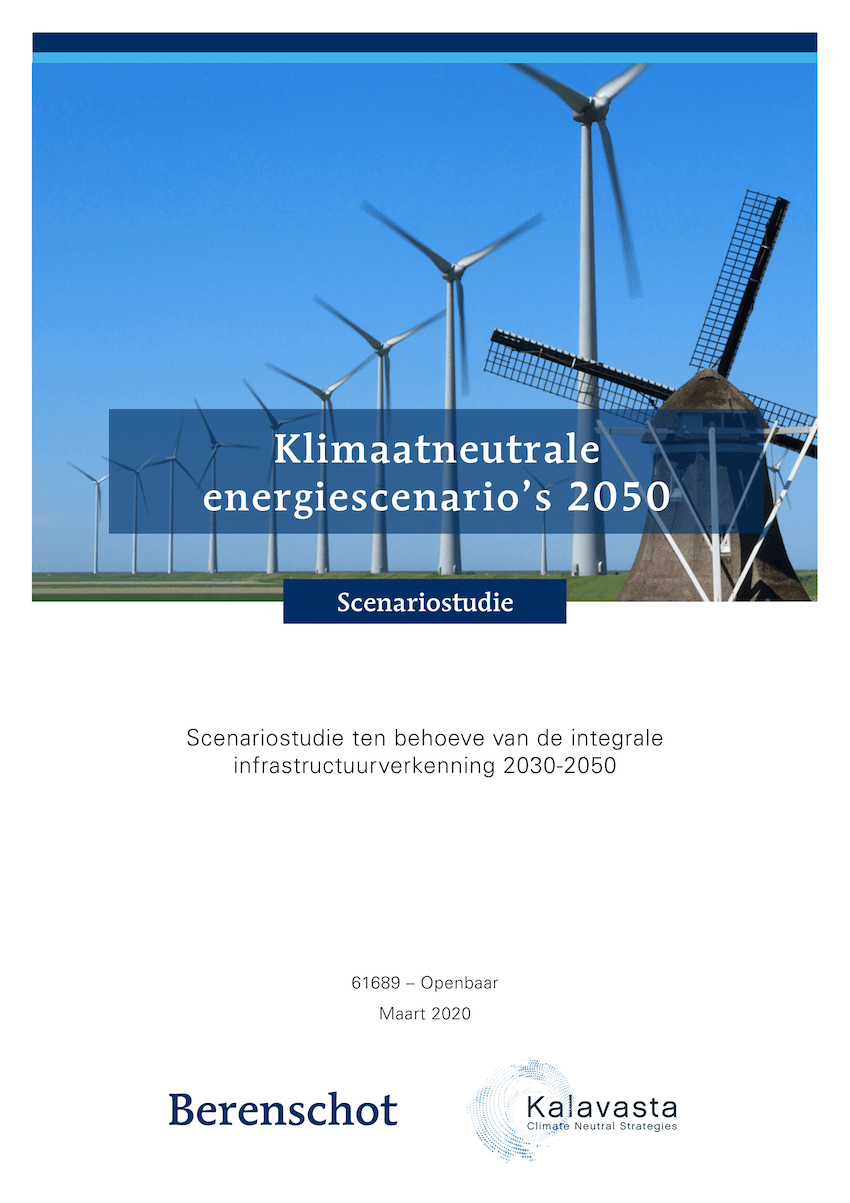 Why would you explore climate neutral energy scenarios for 2050 at this early a stage?

Investments into energy infrastructure are long-term investments which require planning ahead in order to have the right infrastructure in the right place at the right time. The societal transition towards carbon neutrality includes changes to all energy carriers in terms of demand, transport, storage and supply. In order to allow for a successful transition set forward in the Dutch Climate Agreement, the grid operators committed to mapping out the required infrastructure in a project called ”Integrale Infrastructuurverkenning 2030-2050” (II3050). Berenschot and Kalavasta were commissioned to carry out phase 1 of the project in collaboration with the Dutch grid operators. This report rounds up phase 1 of the project.

How did you create this vision of the future?

In order to explore what the Dutch energy system will look like in 2050, four scenarios were developed together with many stakeholders. These scenarios adopt different assumptions but shared the constraint of carbon neutrality. The aim is to explore the boundaries within which the future the energy system will evolve. Laying the boundaries as accurately as possible necessitated including all energy carriers (gas, electricity, heat, hydrogen, and CO2), sectors (built environment, industry, agriculture, electricity, and mobility including international aviation and shipping), and the feedstock requirements of the industrial sector. Moreover, the results were allocated to a neighbourhood or industrial cluster level where possible.

How did you go about?

The scenarios from the 2017 Net voor de Toekomst study were used as a starting point for the four scenarios. Using a sociotechnical scenario framework by Elzen, Geels, and Hofman, these scenarios were further developed to reflect recent developments. For each scenario, a storyline describing the future was created. The calculations were carried out using the Energy Transition Model (ETM) by Quintel Intelligence. As some of the calculations required for this project pushed the boundaries of what the ETM can do, we occasionally resorted to complementary manual calculations. The results were tested against different weather years in a sensitivity analysis in order to assess the security of supply. Finally, the national results were brought to a neighbourhood or municipal level using allocation keys specifically developed for this project. Moreover, results were also reported on an industrial cluster level.

How did you set up the four scenarios?

The four scenarios developed in this study are based on different governance models. The first scenario is characterized by a regional governance, where local communities and individuals are the driving force behind the energy transition. In this scenario individuals are motivated to make choices that lead to a carbon neutral society, including changes in their consumption patterns. Local electricity generation and collective solutions are characteristic for this scenario. In the second scenario the national government is the actor steering the transition. This leads to the highest capacity of electricity production from wind and solar PV of all the scenarios. In the first two scenarios, the Netherlands is practically energy independent (a notable exception however are shipping and aviation fuels). The third scenario is characterized by a European CO2 tax being the main instrument driving the society towards carbon neutrality. In this scenario, there is more import and export of energy from other European countries. In the final scenario, the transition is driven by the dynamics of a free global market in which the least-cost carbon neutral solutions reign. In this scenario the Netherlands imports energy, especially in the form of hydrogen, and hybrid solutions complemented with CCS are central.

What can we learn from this project?

What this study shows is that there is a large array of possibilities when it comes to achieving a carbon neutral society. The technologies required in 2050 largely already exist, with cost reduction expected in the future as a consequence of economies of scale and advances in technology. This study also shows that decarbonization is possible both through a large-scale generation of renewable energy as well as through energy imports. In any case, in a future Dutch society that is carbon neutral the demand and supply of energy are expected to have gone through major changes in all sectors. In order to check the robustness of the study the concept version of the report has been reviewed by PBL.

The study can be used by anyone wishing to explore the energy system beyond the 2030 climate agreement. The report as well as the scenario’s developed in the Energy Transition Model are available to anyone free of charge. The grid operators will now commence with phase 2 in which they will explore in detail the implications of the scenarios to the infrastructure plans beyond 2030.