Enpuls, part of Enexis, asked Berenschot and Kalavasta to analyse and compare the societal costs and benefits of different wind and solar power options. 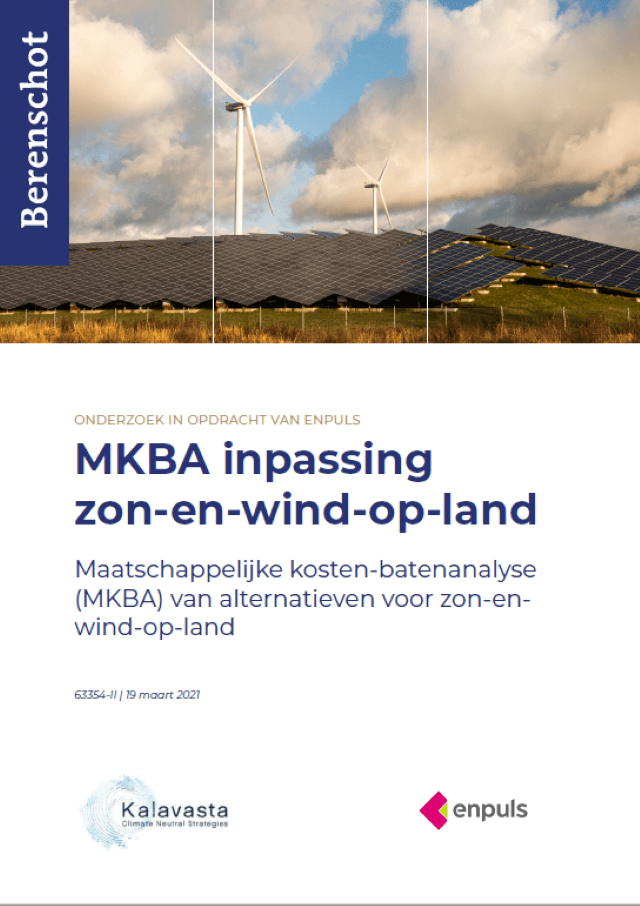 Why study the societal costs and benefits of wind and solar projects?

In order to cut greenhouse gas emissions from electricity production, the Dutch government has appointed regional bodies to develop regional energy strategies (Regionale Energie Strategieën, RES) that will amount to producing a minimum of 75 TWh of renewable electricity from wind and solar by 2030. Both forms of power generation are necessary. Yet, the increasing share of wind and solar in the electricity mix begs the question of what is an optimal distribution of the two technologies. First, an electricity mix including both is advantageous due to their intermittent nature. Wind and solar are to a large extent complimentary with regards to their generation profile, and therefore limit the need for backup power. Second, an optimal mix depends on the societal costs and benefits of the technologies. As with every generation technology, there are costs and benefits that are not occurred by the owner of the plant, but by the society at large. Prioritizing technologies with the largest societal net benefits maximizes gains for the society. In order to provide a contribution to the discussion of an optimal power generation mix, Enpuls, part of Enexis Group, requested Kalavasta and Berenschot to research the societal costs and benefits of solar and wind power in different spatial contexts.

Which placement options for solar and wind power generation were compared?

In this study, we compared the societal costs and benefits of eight different scenarios for renewable power generation: four options for generation through solar, and another four for wind. The alternatives for solar projects consisted of a solar park on agricultural land, solar installed on roofs of residential houses, a solar installation on a company roof with a high percentage of local use of the electricity, and an identical scenario with a lower percentage of electricity consumed locally. The wind scenarios explored the impact of a location of a wind park in either in an urban or a rural area, as well as the impact that a greenfield development has compared to a repowering project. A set of assumptions were defined separately for each scenario in order to simulate typical conditions for the specific scenario. These assumptions included the capacity of the grid connection, the share of electricity consumed by the owner of the panels, the cost of financing, and the opportunity cost of the space taken up by the installation.

How were the options compared?

For each of the options, the direct, indirect, and external costs and benefits occurring over the lifetime of the project were monetized. In addition to the business case of each alternative, we considered for instance the costs of grid expansion, the abatement of greenhouse gases, impacts on soil, and the effect on house prices. The monetization of all costs and benefits was not possible due to lacking research. Therefore, effects such as the impact on the landscape were only considered in qualitative terms. The current costs and benefits were aggregated for each scenario and discounted over time. The remainder of the benefits and the costs is the net present value of the scenario. It represents the total net benefit for the society over time. Finally, the comparison was repeated with cost and benefit values for the year 2030. This was done in order to enable the comparison of the options over time.

What can we learn from this study?

In 2021, all project alternatives have a negative business case, meaning that they do not break even without a subsidy. But when the business case is supplemented with the societal costs and benefits, all eight alternatives have a societal net benefit. This indicates that subsidizing renewable power generation is justified, as it provides the society with net benefits. Towards 2030 the business case of all alternatives improves, mainly due to the expected decrease of investment costs of the technologies. The business cases of the four wind alternatives break even, but only one of the solar options, namely ground mounted solar, breaks even. In 2030 all the options have positive net societal benefits, yet the benefits become less prominent over time due to decreasing marginal benefit from CO2 abatement. Based on the results, altering subsidy schemes for the purpose of steering towards a more optimal mix of wind and solar would be justified. It should be noted that the net societal benefits are very sensitive to assumptions about the future electricity price. For this purpose, an LCOE analysis that is not affected by assumptions about electricity prices was included in the appendix. The results of the report are based on a model that was published with the report and freely available, meaning that those interested can easily explore the effects of altering assumptions.