Enpuls, part of Enexis, asked Berenschot and Kalavasta to compare placement options for solar panels by means of a societal cost-benefit analysis. 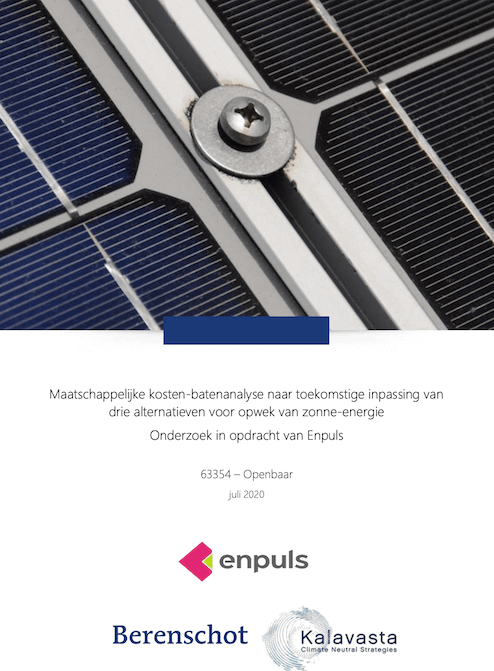 Why study the societal costs and benefits of solar projects?

The necessity of reducing greenhouse gas emissions from power generation in combination with the falling costs of solar panels are spurring a quick growth in their utilization for renewable power generation. Electricity generation by solar is expected to grow from 11.5 PJ in 2018 to 85.2 PJ in 2030 (KEV 2019). Renewable electricity production on land is accompanied by two implications: the necessity of allocating space for the production as well as the need to transport the generated power through the grid given that the consumer and producer of the electricity are not spatially adjacent. In a densely populated country such as the Netherlands land use is accompanied with a significant opportunity cost. Furthermore, as the share of electricity in the Dutch energy mix grows, the national electricity grid will require reinforcement, and in increasing measure if the production of electricity takes place in areas with less capacity. In order to enable the comparison of different spatial placement options of solar panels, Kalavasta together with Berenschot compared three placement options for solar panels with regards to their societal costs and benefits based on documented sources and an open-access model.

Which placement options for solar power generation were compared?

How were the options compared?

For each of these scenarios, indicators were gathered for not only direct costs and benefits but also indirect and external ones. These represent the business case for the owner of the panels, the costs and benefits to the grid operators and authorities, as well as the society as whole. This means that costs such as the opportunity cost of land, and benefits such as those from avoiding CO2 emissions were included in the analysis. The costs and benefits were aggregated for each scenario and discounted over time. The remainder of the benefits and the costs is the net present value of the scenario. It represents the total net benefit for the society over time. Finally, the comparison was replicated with cost and benefit values for the year 2030. This was done in order to enable the comparison of the options over time.

What can we learn from this study?

In 2020, the business case is negative for all three options, without subsidies, while on a societal level the net effect is positive for all three. This result confirms the both the need and the justification for subsidies to solar power. The societal net benefit is highest for solar on company roofs. Differences between the three options diminish towards 2030. As the investment cost of solar panels decreases, solar on land and solar on company roofs reach a positive business case. The business case of solar on household roofs remains slightly negative, indicating a need for some subsidising in 2030. Nevertheless, the societal net benefit of the latter option is the highest of the three in 2030, indicating a justification for continuation of subsidies. The societal benefits of solar or land and solar on company roofs decrease. This is due to the lower CO2 intensity of the electricity mix and thus the lower benefits from CO2 abatement. For easy interpretation of the results, we recommend reading the LCOE analysis in the appendix of the report, as the LCOE does not include any assumptions regarding the development of energy prices. The results of this study indicate a discrepancy between the SDE subsidy scheme and the societal net benefits of renewable energy projects. The results also suggest a decreasing need for subsidies for solar projects towards 2030.