Financing the Energy Transition in the Netherlands

We estimated the investments required to make the Netherlands climate neutral and evaluated to what extent these investments could be financed. 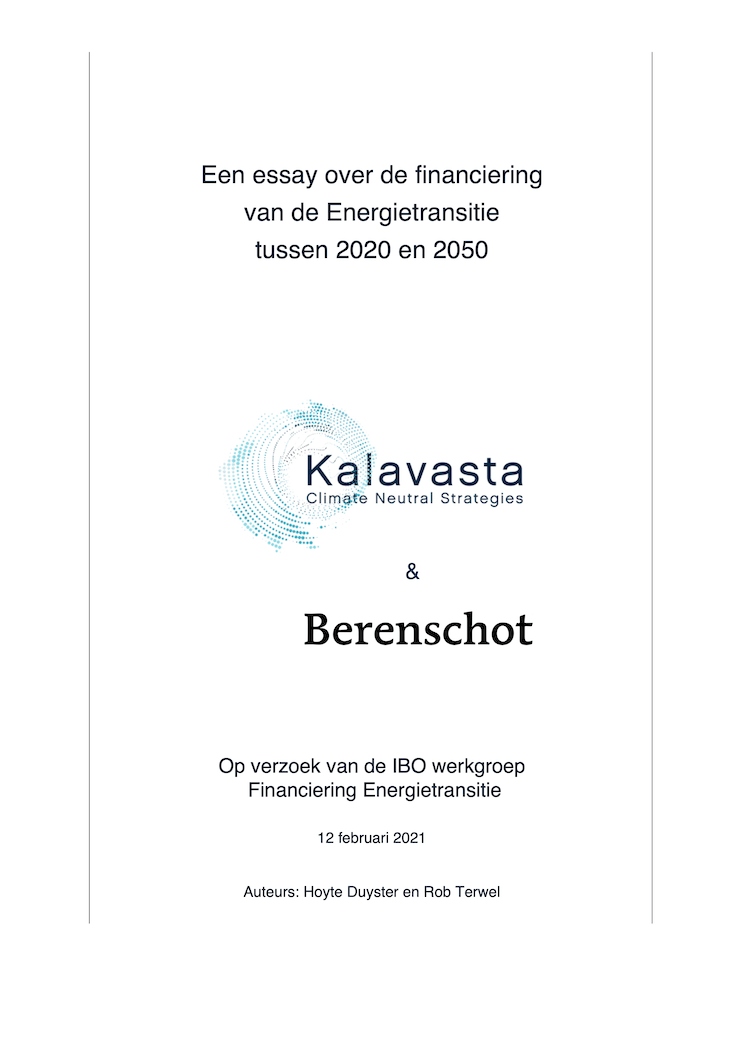 Why are you looking into this subject?

Many scenarios of climate neutral energy systems can and have been made. As we have a better idea of how we may reduce emissions in various sector, we may also start to analyse these scenarios from a financial perspective - what are the total investments required, and what are the yearly costs. However, a climate neutral energy scenario is only a picture of a future energy system - it does not describe how to get there. In order to see that, we could look into whether the investments required generate a positive business case (demand) and whether financing can be sourced for them (supply). A negative business case or a lack of financing could stand in the way of realising part of the energy transition - and we may only notice once a choice for a certain emission reduction solution has been made.

What investments are required and how did you quantify them?

To estimate the investments required, we used the Energy Transition Model (ETM). We used the base year, the Climate Agreement scenario for 2030 and an average scenario of the Climate Neutral Energy Scenarios for 2050. For all these scenarios we exported the investments on a sector and technology level - these are the investments required to (re)build each energy system. By comparing these we find that rebuilding the current energy system would require investments of about 330 billion euros, whereas the 2030 and 2050 scenarios would call for additional investments of about 120 and 350 billion euros, respectively. In our report, we also show how these figures are distributed over sectors and technologies.

What do these investments mean for national costs, would they increase?

In building a climate neutral energy system, we are often replacing one technology with another, which is more capital-intensive, but cheaper to run. For instance, a gas power plant has relatively low investment costs but requires gas to produce electricity, whereas wind power has higher investments costs but virtually runs for free. This example is quite representative for many of the changes that occur between now and the 2050 scenario. We have evaluated whether the additional investments also lead to higher national costs and conclude that they do not result in significantly higher national costs when comparing the climate neutral 2050 scenario with a scenario of the current energy system, using the expected energy prices of the future.

Do the investments required have a positive business case?

If we look at the business case for the investments done towards 2050 from a 2020 cost perspective, many investments result in a negative business case. That is to say that it would be cheaper to reinvest in a reference technology rather than implement a different one as described in the scenario. However, this is based on 2020 figures. As we also saw (implicitly) in the previous question, many business cases are set to improve as on the one hand new technologies experience cost reductions towards 2050 and on the other hand the use of fossil fuels is getting more expensive. We do expect some business cases to remain negative - infrastructure investments (on their own) almost by definition are. If a business case is (still) negative, the government could cover the difference through policy (e.g. subsidies, CO2-pricing or norms). If not, the demand for these investments could be low, meaning they do not fully materialise.

If an actor wants to invest in a certain solution, what criteria may obstruct financing?

Even if an investment has a positive business case, it may not materialise due to a lack of financing (supply). In our report we distinguish three main grounds on which financing may not be obtained for a given investment. First, the actor could not be credit worthy. Second, there could be a shortage of 'long duration' capital, i.e. there is not enough capital available that could be locked up in long-term investments. Third, every application is subject to an evaluation on credit factors where e.g. a new technology, low cash flow, uncertain cashflow a.o. may qualify it as risky and less likely to be successful.

What part of the investments required would be at risk on the grounds of financing?

We estimate that for the 2050 scenario about 45-50% of the additional investments, or 155 - 175 billion euros on 350 billion euros would be at risk on the basis of financing. A relatively small part due to credit worthiness, and a significant part due to a shortage of long capital and/or credit factors. There is therefore a very substantial share of additional investments with financing risks. This is not something we experience now or in the short term as we are making first steps in cutting emissions, but a problem that will become more apparent as we go further and faster in reducing our emissions. If there is no capital available for these investments, the energy transition could come to a halt - which means we should try to find solutions now.